Is there a god? Is there any “higher power”? That’s a question that has kept many wise men conflicted throughout history. Philosophers and monks, kings and politicians, and scholars and common people will have an answer to it (not necessarily confident). Many try to stay away from the topic even if they have a strong opinion. But Richard Dawkins is not such a character.

About the Author – Richard Dawkins

Richard Dawkins has never shied away from strong questions or criticisms. Perhaps that confidence is due to his study and extensive research in evolutionary biology. His books “The Selfish Gene” and “The Extended Phenotype” created quite the stir in the academic and literary worlds because of his strong approval of evolutionary theory. During his term as a professor at Oxford University, he was selected as Simonyi Professor for the Public Understanding of Science – a special chair created for public outreach. His criticism of religions, creationism, and intelligent design was not just limited to public speeches. He has compiled most of his compelling arguments on atheism and published them as The God Delusion.

In my earlier review of the book Sapiens, I would’ve highlighted the quote, “No concept, idea or theory is sacred and beyond challenge.” Richard Dawkins emphasizes the same argument in The God Delusion. Any idea (religious in this context) should be subject to criticism, scrutiny, satire, and discussion. It just cannot be absolute and therefore should not have a protected place in society. The book helps us resonate with the author’s claim for free speech. And we all know how the cases of blasphemy have been treated throughout our history. 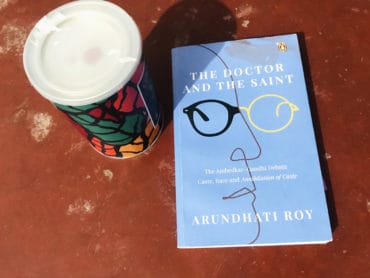 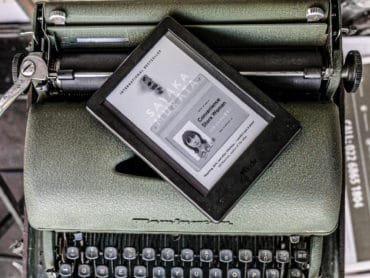 Discussing sensitive topics like religion amongst ourselves could be tricky and might even turn ugly. Despite Dawkins’ rational approach, he gets flak from many for being offensive and insensitive to people’s belief systems. He addresses it in the book by politely suggesting that he is not explicitly attacking any particular religion but the entire concept of God.

Quote: “We are all atheists about most of the gods that humanity has ever believed in. Some of us just go one God further.”

In order to communicate his premise resolutely, he entirely rejects creationism. With the help of science and technology at his disposal, he begins to debunk the creationist argument that the universe was created and is being governed by one powerful being. The creationists believe that their sacred texts contain key answers pertaining to the origins of the universe and humankind. Dawkins exposes the amount of absurdity, contradictions, and inaccuracies present in these know-it-all books written mostly in the middle ages.


He went all guns blazing as he wrote, “The God of the Old Testament is arguably the most unpleasant character in all fiction: jealous and proud of it; a petty, unjust, unforgiving control-freak; a vindictive, bloodthirsty ethnic cleanser; a misogynistic, homophobic, racist, infanticidal, genocidal, filicidal, pestilential, megalomaniacal, sadomasochistic, capriciously malevolent bully”.

And there’s a valid reason he does that. For instance, slavery was legal, but being homosexual is an unjustifiable sin according to the Bible (well, most of the sacred texts, if not all). Now we all know that these are obsolete. Unfortunately, many are still in practice and are being vigorously being defended by their followers. Theists can argue saying that the old texts are misinterpreted and taken out of context. Touché! We can see the religious leaders and scholars from the same religions have irreconcilable differences. And we could see them conveniently cherry-picking some verses and ignoring the rest.

The pseudoscientific argument of intelligent design has been endorsed by creationists for centuries. More than the lack of evidence due to underdeveloped scientific tools, people were afraid to be persecuted if they speak against any religion and its authorities. Creationists do not believe in evolution. But evolution cannot be denied anymore. It is not up for debate. It is a scientifically proven theory. Darwin introduced the Theory of Evolution by Natural Selection in the mid-19th century. Academically, Richard Dawkins focused further in the field. He demolishes the concept of intelligent design effortlessly. Richard Dawkins has the expertise to back his claims with solid pieces of evidence – thanks to his specialization in genetics and evolutionary biology.

Conventional theists believe religious texts dictate morality. Another sad reality is that many countries have been built on those very foundations. Dawkins outright disapproves of this rudimentary notion. He writes about the subjective nature of morality and how it has changed from time to time. I have stated about slavery previously and how it was a legal act. But how did the governments or authorities decide about the legality? Obviously, basis the so-called “sacred texts from god”. But as times change, morality defined by the ruling class changed. That too, not because of newly-found guilt or delayed empathy, but to hold power and avoid people’s uprising. The book inspires us to draw similar parallels – for instance, LGBTQ rights – and makes us realize the regressive ideas in religions alike. Still, religious scholars get defensive and conveniently cherry-pick favorable content. This just reaffirms that morality is not absolute.

The God Delusion is not just an attempt to expose the discrepancies of the creationist narratives. According to the author Richard Dawkins, the existence of an omnipotent, omniscient, and benevolent creator is practically impossible. Even though the burden of proof rests with the believer, he goes on to explain the lack of credible evidence in religious faiths. And, people who believe and follow in a concept/cult/religion without any convincing evidence are delusional (not meant as an insult).


It is true that Dawkins thoroughly and aggressively confutes the claims asserted by creationists and believers. But at the same time, he doesn’t fail to empathize with the theists. He acknowledges that the concept of God does provide emotional support to its believers just like an imaginary friend would comfort a lonely child.

Quote: “A child is not a Christian child, not a Muslim child, but a child of Christian parents or a child of Muslim parents.”

He makes it clear that his aim is not to discredit and disrespect any god or religion. His mission is to look for truth, propagate scientific temper, and educate the masses about critical thinking. The God Delusion objectively approaches this very task with Dawkins’ uncompromised opinions and straightforward facts backed by scientific evidence and rational thinking. Grasp the objective insights in the book without any judgments and emotional distractions. Everyone – be it an atheist or a believer – should read the book. Hopefully, it will give you some answers. But more importantly, I am sure that The God Delusion will make you ask the right questions! You can get the book here! 📖 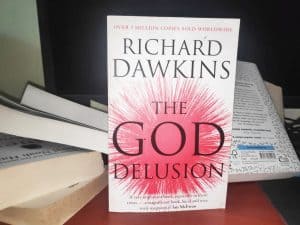 Is there a god? Is there any “higher power”? That’s a question that has kept many wise men conflicted throughout history. Philosophers and monks, kings and politicians, and scholars and common people will have an answer to it (not necessarily confident). Many try to stay away from the topic even if they have a strong opinion. But Richard Dawkins is not such a character.

Inspired by the books of Mark Twain at school, Sabari Nath started his habit of reading fiction and adventure novels. Gradually, he evolved to enjoy more nuanced novels like The Hitchhikers Guide to the Galaxy and Sophie's World. Having worked for years as a content writer, he hopes to follow his passion for writing novels in the near future!